Start a Wiki
Yuna is one of the main characters in B: The Beginning. She is the childhood love of Koku and the reason behind what Koku does as Killer B.

Kind and friendly, Yuna looked out for Koku a lot when they were younger. Understanding that he would get teased if seen together, she opts to talk elsewhere. She appreciates his protection and offers hers to him as well.

In present times, she is colder and unafraid to call out another Market Maker for using so much gold solution, due to being brainwashed. She is also determined in accomplishing her goals, such as capturing Koku, and does so with no questions to her authority.

After the Jet Black Epitaph incident is over, Yuna reverts back to her original cheerful personality.

Pale skin and pale pink hair, Yuna is very pretty and dainty. She is usually seen in a black fit and flare dress. While associated with Market Maker, she has a small pink tattoo under her right eye, in line with the other clown tattoos other Market Maker members have.

Yuna is a member of Market Makers and is first depicted in the dark room scolding another Market Maker for being so careless in using the gold solution needed to keep Reggies in control. Then, she is ordered by Minatsuki to capture Koku, and does so by wearing a mask. During the fight with Koku, they are equally matched until Koku turns in the black winged king and knocks her mask off. Once he sees her face, he cannot continue with the attack as he has finally found Yuna, the girl he was looking for. She doesn't seem to return those feelings and stabs him. Yuna blames him for the deaths of all their friends and hates him. Koku looks into her eyes and begs her to remember him, and she is reminded of their past together - how they were close friends that always protected each other. Yuna stops her attack and asks Koku where he's been and that she's been waiting for him. The reunion is cut short as Minatsuki, who was watching from a distance, stabs Koku by stabbing Yuna from behind as well. Minatsuki removes Yuna and carries her over his shoulder and gives her to another Market Maker, Laica, while he deals with Koku. Koku is beat down as Minatsuki orders spears to be shot down from the blimp. He is only saved when Keith, with whom Koku was having a conversation earlier, shoots Minatsuki with blue steel, revealing their weakness and stops the assault.

Yuna is then seen to be recovering in a pool. She is completely recovered and no longer has the clown tattoos on her face that signify her affiliation to Market Maker. In fact, she now has complete belief that Koku will come for her and all the Market Makers, angering Minatsuki to the point of choking her. He is only stopped when he is alerted of Koku's arrival to the blimp by Laica, who came to gave him the shot of the gold solution. But when Minatsuki starts saying he will definitely kill Koku and is clearly going insane, Lacia decides not to medicate Minatsuki as to stall Koku for a while.

An unconscious Yuna's hair then begins to change to white because of Koku's arrival, whose hair also turned white. Laica, then picks up Yuna and flies off with her in the helicopter to the jetblack, where Koku's ability to regenerate is nullified. There Yuna is tied up and when Lacia explains his plan to kill Koku and take his place as the black winged king. Yuna tells him that won't be possible and as a result Lacia stabs her in the stomach. But he says he won't kill her until he kills Koku. As Koku and Lacia fight, Yuna watches as Lacia takes advantage of Koku's inability to regenerate and repeatedly stabs and shoots him. However, when Lacia can't seem to break Koku's spirit, Lacia pulls Yuna's knife out so that she begins to bleed a lot. That triggers Koku to be reinvigorated and fights Lacia with more spirit. At the last second, Koku transforms his leg into blue steel, an ability given to him by Izanami and cuts of Lacia's head. Then, he is seen carrying Yuna's body out.

It is later revealed in the epilogue that Yuna survived and lives with Koku at Keith's place. When Lily came to Keith's place to pick him up for the first day of work, she excitedly asks where the two of them are, in which Keith tells her they went out. As the two of the drive to the station in her comically small car, she sees them out of the side of her eye and U-turns back to them. She then offers them a ride, to which Keith and Koku state that there is absolutely no space. Yuna thanks Lily for the offer of the ride and accepts, trying to persuade Koku to get into the car as well. Both of their hair colors have reverted back to their original hair colors and are no longer white.

At first, Yuna is depicted as hating Koku and blames him for the death of all their friends and family. She is sent to capture him and after stabbing and defeating him, she looks Koku in the eyes and is overwhelmed by memories. Yuna and Koku were very good friends when they were younger, always protecting each other from their stronger friends. They decided to come up with a sign so that if one of them needed the other, the other would know. This sign is actually the signature for Killer B, in which B is actually 13, Koku's number, scratched together and the extra four slashes next to the B is 4 in Roman Numerals, Yuna's number. Once Yuna is reminded of her past with Koku, because her memories were altered, she is no longer on the Market Maker's side but believes in Koku and hopes that he will come get her. The two of them are bound by fate, as the inscription says and so they are constantly reaching for each other. 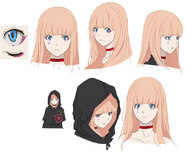 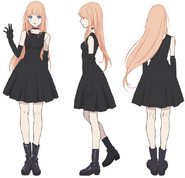 Add a photo to this gallery

Yuna is an Okinawan name that means "Moon."

Retrieved from "https://b-the-beginning.fandom.com/wiki/Yuna?oldid=1022"
Community content is available under CC-BY-SA unless otherwise noted.